DANTE AND THE ANIMATION CINEMA. CURATED BY HIROMI YAMADA 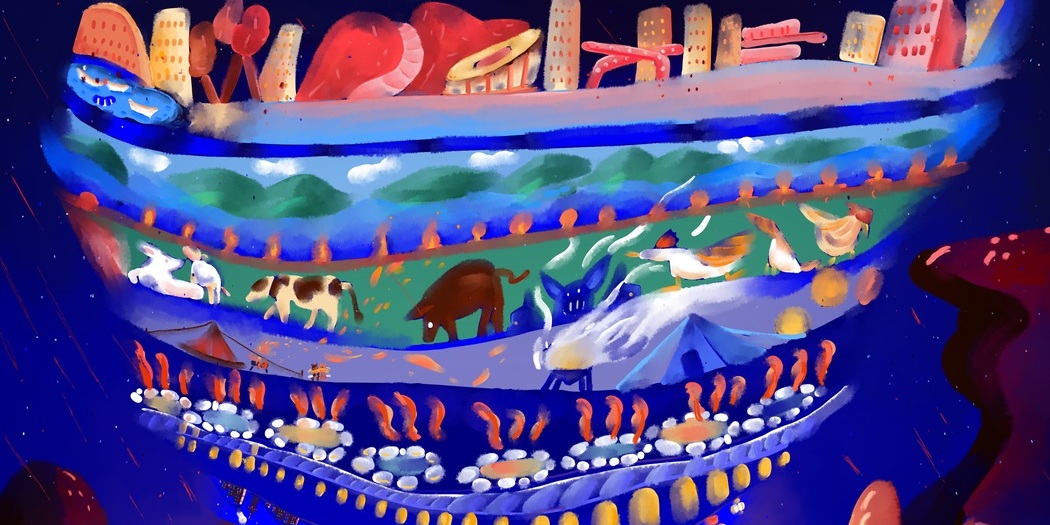 FROM THE FABULOUS WATER (DALL'ACQUA MERAVIGLIOSA)
by Caori Murata , 1’42
Japan, 2021

She was born in Guangdong China, she moved to Japan in 2016. She received her Ph.D. in animation film from Tokyo State University of Fine Arts School of Visual Studies in 2020. She currently works as a creator and producer of animation film. He has won awards in animation festivals in China, USA and Germany, including the special jury prize of Feinaki Beijing Animation Week in 2020. He participated in the RAM PRACTICE 2021 EXHIBITION in Tokyo, an international computer graphics competition by invitation in 2021. She is particularly interested in incorporating elements of non-visual art into her works. Www.sijia-luo.com

Born in Japan in 1994. After graduating from the Musashino University of Fine Arts in Art and Drawing, she received her PhD in Animation Film at the Tokyo State University of Fine Arts School of Visual Studies in 2020. She currently works from freelance as an animator and illustrator. Among his works, Fruits in the tub (2017), Friends (2018), Our home and Sketches of a journey in nature between plants and flowers (2020) .He has held two solo exhibitions: Al di la di Finestra (2019) and Her bookshelf (2020) in Tokyo.https: //caorimurata.com/

Born in China in 1992. She received her doctorate in animation film at the Tokyo State University of Fine Arts School of Visual Studies in 2018. Animated films she directed have been in competition and awarded at numerous international festivals, including the Global India International FilmFestival where he received the award for best director, the award for best animation in the ArteNonStopFestival festivals in Argentina, Asia Peace Film Festival in Pakistan, the Mobile festival in Macedonia, 11th Tehran International FICTS Festival in Iran. She currently works as a CGI creator at STUDIO 4C. https://vimeo.com/user49751184

She was born in 1991 on a small island in Japan. During her college years spent in Kyoto, she went on an exchange program to the Rhode Island School of Design. Received the master degree at the Tokyo University of the Arts, Graduate School of Film and New Media. After graduation, she worked for it as a researcher assistant for three years. Her latest film"A Bite of Bone"(2021) won the grand prize for short animation at the 45th edition of the Ottawa International Animation Festival. (honamiyano.com)

Born in China in 1991, she graduated from the Xi'an Academy of Fine Arts. She moved to Japan in 2014 and earned her doctorate in animation film from Tokyo State University of Fine Arts School of Visual Studies in 2017. Her works include Umbrella from 2016, and South Forest from 2017 which was awarded at the Hiroshima Animation Film Festival. She currently works in an animation film production company, continuing to create her own independent works of hers.

Born in Japan in 1985. He holds a doctorate in animation film from the school of visual studies of the Tokyo State University of Fine Arts. He currently works as a commercial animation filmmaker and recorder. What fascinates him most are the empty spaces, the metamorphosis and the visual illusion, well summarized in the checkerboard drawings, with which she makes animated films, a line of research that she intends to continue in the years to come.

Born in South Korea, he holds a doctorate in animation film from the visual studies school of Tokyo State University of Fine Arts. After his studies he continued his career, specializing in the making of animated short films. He has a great admiration and was influenced in his style by great artists of the twentieth century such as Vassilij Kandinsky, Robert Delaunay, Henri Matisse. One of his latest works, Creative Evolution, in 2019 was awarded at the Mainichi Film Competition and was also nominated for the Ōfuji Noburō Prize, as well as having entered the program of various international festivals.

Born in South Korea, she graduated with a doctorate in animation film from the school of visual studies at Tokyo State University of Fine Arts. He currently teaches Culture of Animation at the Faculty of the same name at the International University of Kibi. His animation works include Little Sweetheart (2010), LANGUAGE (2011), My Frame (2013) and Everyday Sins (2014)