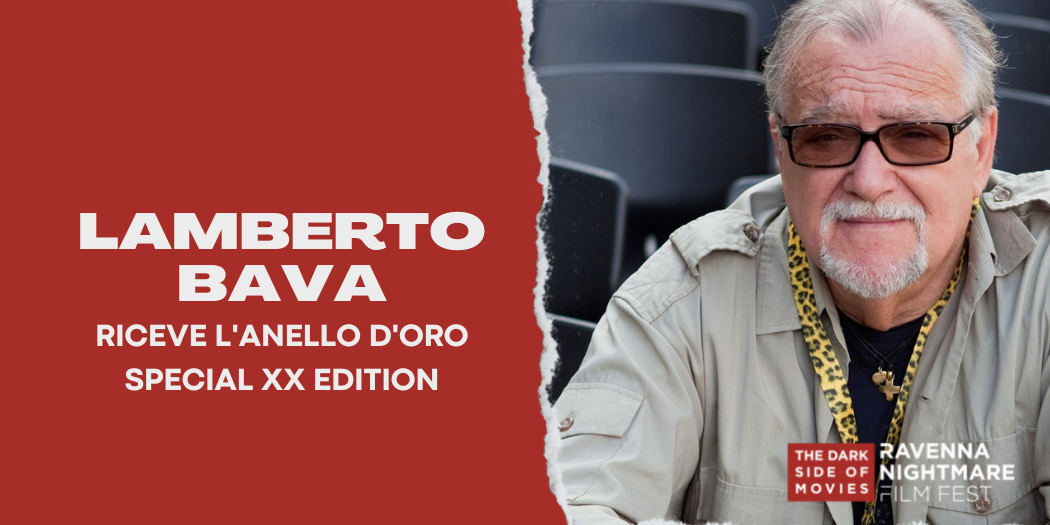 Lamberto Bava is an Italian film director, screenwriter, film producer and television producer. For generations his family has been involved in cinema, particularly directing: his grandfather, Eugenio Bava, was a cameraman and cinematographer while his father, Mario Bava, was one of the pivotal directors of Italian horror cinema and largely influenced the evolution of the genre abroad. Continuing the family career, Lamberto is today a multifaceted and brilliant artist, who over the years has succeeded in the not inconsiderable task of establishing himself, with merit, in cinema, on the small screen and also in literature, thanks to his novels.

It is our honor to bestow on him the Golden Ring of the next edition of the Ravenna Nightmare Film Festival, now in its 20th year. An undisputed master of genre cinema and beyond, this award celebrates his visionary genius and ability to create a filmic grammar in which the languages, archetypes and popular icons of a twilight world interlock, dialoguing with each other. Bava, rereading the plots of the genre, liberates filmic matter, shaping it into a hybrid of contaminations between imagery and forms with an anarchic explosion, creating a unique body, a free organism that tirelessly phagocytes and reworks experiences and narrative drifts.

His career as a director began as an assistant director to his father, Mario Bava. During the shooting of the film Schock (1977), his father allowed him to direct some scenes. The joint work continued in 1978 with a full-fledged co-directorship in La Venere d'Ille, a television film that was part of the series The Devil's Games.

In 1979 there was the breakthrough that allowed the son to work alone on the film Macabre, whose theatrical release in Italy occurred two months before his father's death. 1980 was the beginning of his collaboration in Dario Argento's films, which flowed into the making of Dèmoni and Dèmoni 2...The Nightmare Returns. In 1983 he directed the thriller La casa con la scala nel buio produced by Luciano Martino and starring a young Andrea Occhipinti.

In 1986 he made the film Morirai a mezzanotte, produced by Reteitalia, initially intended for television then released in cinemas. And then again in 1987 he devoted himself to TV horror by directing two TV miniseries. The first dated 1988 and was titled Yellow Chill. This was followed by a second, called High Tension. Also during this period he directed the first six episodes of the TV series Night Shift, conceived and supervised by Dario Argento for Enzo Tortora's TV program Giallo.

In 1989, however, is the remake La maschera del demonio, a homage to his father's film of the same name, made for an international television co-production called Sabbath, consisting of six films, which also ended up being distributed in cinemas abroad. In 1992 he directed the film Body Puzzle. He later edited the column I nocturniani in the monthly Nocturno.

Other fantasy television miniseries made by Lamberto Bava are: Desideria and the Dragon's Ring (1995), Little Sister and the Dream Prince (1996), and The Princess and the Pauper (1997), in which such well-known faces of the small screen as Anna Falchi, Raz Degan, Lorenzo Crespi, and Valeria Marin iintegrated with veteran actors such as Franco Nero, Christopher Lee, and Max von Sydow.

In 1999 he made the adventure miniseries Caribbean, starring Mario Adorf and Remo Girone; while in 2000 he made the crime miniseries L'impero with Claudio Amendola and Claudia Koll.

In 2014 he made his debut as a writer by publishing the horror novel Only for Us Vampires. In 2018 he returned to directing with the film Twins starring Gérard Depardieu. In 2018 the documentary Bava Puzzle the fantastic cinema of Lamberto Bava directed by Daniele Ceccarini and Paola Settimini was made, tracing his career through the testimonies of friends and collaborators. In 2020 his second novel The Third Day was released by Cut-up Editions.

In 2021 he received the Lifetime Achievement Award at the Heroes International Film Festival in Rome.

In 2019 Ravenna Nightmare Film Fest begins a project that, with the awarding of the "Golden Ring Special Edition" prize (made by Marco Gerbella Orafi), recognizes the talent and work of those filmmakers who, when measured with the genre, have reached levels of excellence. Initially conceived as a trilogy (in 2019 it begins with the great director Liliana Cavani, in 2020 with a tribute to the cinema of Marco Bellocchio, and in the 2021 edition, with an evening event in which it is awarded to Maestro Pupi Avati), the Golden Ring continues today to represent a fundamental and valuable moment of our Festival.